Taste Of The Week: Viognier 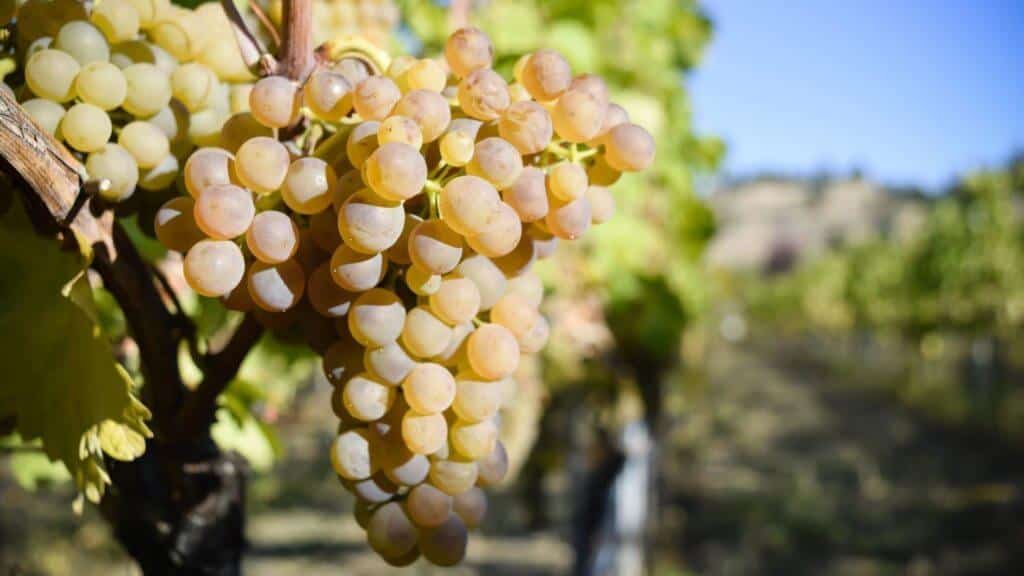 Viognier is a white wine grape grown primarily in France, though it has plantings all over the world. Though often unfairly compared to chardonnay, viognier (pronounced “vee-own-yay”) it’s its own beast. The grape produces full-bodied white wines. Unlike chardonnay, viognier wines are renowned for their fruity flavor and aromas that include vanilla, peach, pear, and violet. Viognier grapes appear in French wines from the Rhône Valley, such as Condrieu, but it can also be found under its own name from vineyards across the globe. The wine’s fruitiness and low acidity make it an excellent choice for pairing with spicy foods, as we’ll see.

Like many Old World winegrapes, viognier’s origins are obscure. It might possibly have arisen in Croatia. The Romans probably planted it first in the Rhône Valley. Even the name is an obscure one. Historians attribute the name to the French city called Vienne, a former Roman outpost. Though once a common winegrape in France, viognier almost went extinct in 1965. There were only eight acres in the northern Rhône Valley, producing just 1900 liters of wine annually. Since then, acreage has increased as the grape has risen in popularity. Plantings exist today in France, Australia, the United States (California, Washington, and Virginia), South Africa, and Argentina.

Connoisseurs describe the wines made from the grape as having flavors and aromas of tangerine, mango, peach, honeysuckle, and rose. Oaked viogniers may be creamier, with hints of vanilla, nutmeg, and clove. The wine can range from light to full-bodied and bold. In general, it is more fragrant, less acidic, and lighter than chardonnay. The mouthfeel is often described as slightly oily, a signature characteristic of viognier.

Where is viognier grown?

The wine originates in the Rhône Valley of southeastern France, but many quality viogniers are grown in the Languedoc-Roussillon region and elsewhere in France. In Australia, the Barossa Valley, Eden Valley, and the Adelaide Hills yield quality wines every year. In the United States, Sonoma, Napa, Monterey, and Paso Robles have viognier acreage. The Walla Walla and Columbia Valley of Washington State do, too. Tuscany, Piedmont, and Sicily in Italy grow the winegrape on several thousand acres. The Paarl, Stellenbosch, Franschhoek, and Elgin regions of South Africa are also viognier-growing regions.

The grape can be a finicky one. It’s very susceptible to powdery mildew. The yields may be unpredictable, often coming in lower than expected. Some grapes are more forgiving than others, but not this grape. It will fail to fully develop its aromas and flavors unless it’s fully ripe when picked. If it’s picked too late, the wine turns out less fragrant than it would otherwise have been, and oilier too. The grape favors warmer climes and longer growing seasons.

What pairs with viognier?

Floral notes and medium acidity are the defining attributes of this wine. Food pairings should therefore focus on accentuating the wine’s flowery flavors (honeysuckle, tangerine, peach) without overwhelming them with acidity. For an oaked California viognier, an excellent pairing would be chicken tikka masala. The bold spiciness of Indian food and the savoriness of the onion and garlic are a wonderful counterpoint to the wine’s fruitiness and creaminess.

What are the best viogniers to buy?

K Vintners Powerline (vintage 2016) retails for $44.99 from Total Wine & More, and earned a score of 95 from Jeb Dunnuck. The grapes grow in the Walla Walla region of Washington State. There’s also this list of voigniers to try from Vivino.

And there you have it! We hoped you enjoyed another Winegrape 101 class today. If you enjoyed this post, don’t forget to click around our blog and find some of the other cool stuff we’re publishing. And don’t forget to check out our website for the latest in ultra-modern wine racking solutions. Happy sipping!