The History of Wine – Part I 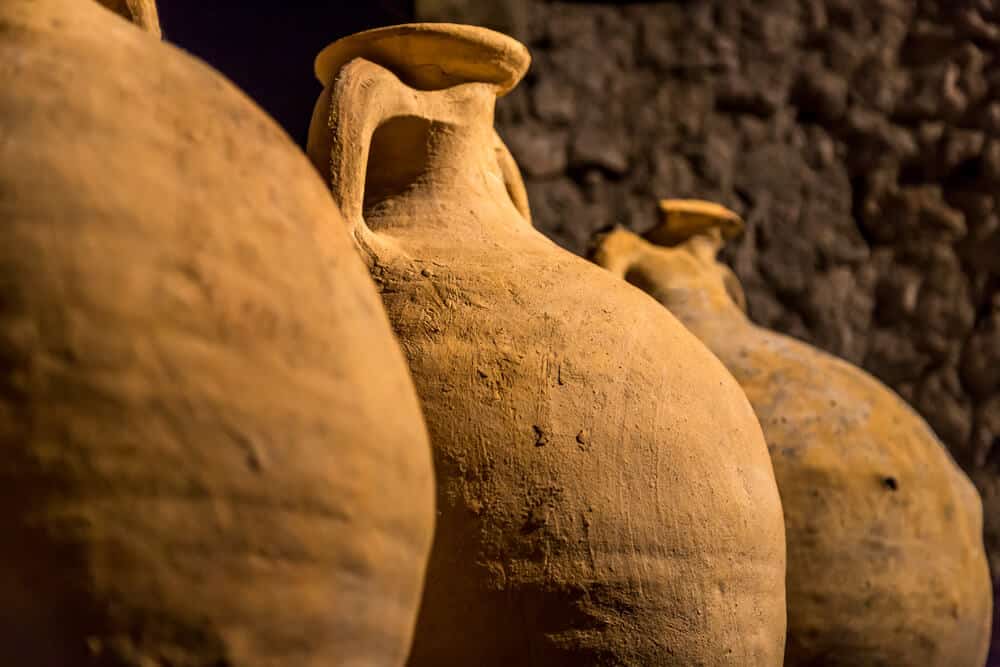 Welcome back to the Ultra Wine Racks blog! This is the first part of a three-part series on the history of wine. We love wine so much that we wanted to go back and research how it all got started, and we found so many interesting historical tidbits that we thought we’d share it with you (or fellow oenophiles) in a series of blog posts. So grab a glass of vino, sit back, relax, and enjoy…THE HISTORY OF WINE (Part I).

The Pre-History of Wine

Grapes grow wild in areas of Armenia, Georgia, Azerbaijan, the northern regions of the Levant, southeastern and coastal Turkey, and the north of Iran. Evidence suggests that the cultivation of wild grapevines began before written records were kept—making wine cultivation technically prehistoric. Historians surmise that humans climbed trees to pick berries, liked their sweetness, and collected them in containers. After several days, the juice at the bottom of these containers would ferment into low-alcohol wine. Around 10,000-8,000 BC, when agriculture and sedentary lifestyles came into vogue, grapevine cultivation began.

The earliest evidence of intentional wine fermentation comes to us from China (approx. 7,000 BC), Georgia (approx. 6,000 BC), Iran (approx. 5,000 BC), Greece (approx. 4,500 BC), and Sicily (approx. 4,000 BC). The world’s oldest known winery was discovered in a cave called Areni-1 in Armenia. The site dates to 4,100 BC. Archaeologists have found cups, jars, fermentation vats, and a wine press there, as well as Vitis vinifera vinifera seeds and vines.

The History of Wine in Cultures of the Ancient World

Wine played a central role in Egyptian, Persian, and Greek religion and politics. Winemaking was introduced to Egypt’s Nile Delta from the Levant around 3,000 BC. Winemaking became a nationalized industry, overseen and regulated by Egyptian royalty. Egyptian wine was mostly red, and given red wine’s resemblance to blood, it played a central role in superstitions and religious rites. White wine, however, had no such stigma. Analysis of clay amphorae found in the tomb of King Tut revealed white wine residue, indicating that white wine was available to the ancient Egyptians (though perhaps only through trade).

Herodotus wrote that the Persians were “very fond” of wine and drank it often. Carved reliefs in the Apadana Palace in Persepolis show soldiers of conquered lands bringing tributes of horses and wine before the Persian king. Further west, the Greeks laid the foundation for modern viticulture. Wine was so central to Greek culture that it had its own deity: Dionysus, the Greek god of wine and debauchery. Greek wine was renowned and widely exported. The Greeks also spread wine and viticulture across the Mediterranean, to their colonies in Spain, Sicily, Italy, and southern France.

The History of Wine in the Roman Empire

The Romans also heavily influenced viticulture as we know it. Wine was central to the Roman diet and in Roman times, winemaking became an exact science. Roman winegrowers built special wine storage rooms and developed fumaria, or smokehouses, which sped up the aging process. The Romans created new grape varietals and implemented new cultivation strategies. After the Greeks invented the screw, wine presses began to appear in Roman villas. The Romans were also the first to implement a system of appellations as certain regions of the Roman Empire became famed for their wines. The Romans also finished what the Greeks started: through their colonies, they established almost all of the modern-day winegrowing regions in Western Europe.

This concludes Ultra Wine Rack’s first installment of THE HISTORY OF WINE. Stay tuned for Part II next Friday. Don’t forget to visit our site for the latest in innovative modern wine racking solutions. And as always, happy sipping!