5 Ways to Celebrate the 4th of July with Wine 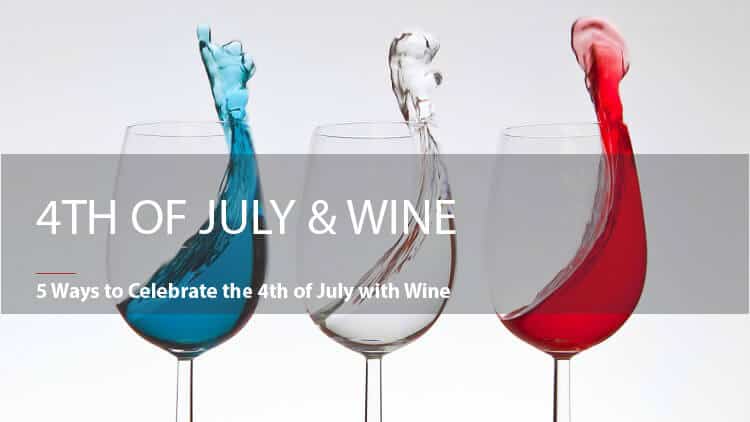 It’s that time of year again: summer’s arrived, the days are long and warm, and Independence Day is just around the corner. It’s the perfect time for wine lovers everywhere to bust out their favorite bottles from their wine racks and toast the United States on its 242nd birthday. Having trouble figuring out ways to combine wine with the Fourth of July? Here are five suggestions to get you started.

1. Have a picnic under the stars (or the fireworks).

Step 1: Pack some fruit and cheese (and maybe even a little salami) in a basket. Step 2: Slip in a bottle of Louis Jadot Macon-Villages chardonnay or some old-vine Lodi Zynthesis zinfandel. Step 3: Spread a blanket in a city park and sip your wine in style as you watch your local fireworks show. Step 4: If you’re feeling adventurous, and have set off enough fireworks during the preceding week to singe Francis Scott Key’s eyebrows, head out of town to a national or state park and spread a blanket under the stars. Want to celebrate America’s birthday during the entire month of July? The Perseid meteor shower begins July 23, so nibble cheese and sip wine as nature’s own fireworks show explodes over your head.

2. Watch Independence Day with a glass (or a bottle) of your favorite vino.

What’s better than listening to Bill Pullman’s awe-inspiring speech? Listening to it with a good buzz on. Get together with a bunch of your friends (make sure everyone brings a bottle) and have a movie night this July 4th. Nothing’s better than watching Will Smith punch out aliens while you sip Franciscan Estate Magnificat Malbec, and Randy Quaid’s heroic sacrifice is easier to swallow with a little Chloe Pinot Grigio Trentino. Some other good Independence Day movies are Mr. Smith Goes to Washington, The Right Stuff, Sergeant York, The Patriot, Air Force One, Miracle, Top Gun, The Sandlot, and of course, 1776.

3. Have a cookout with your wine-loving friends.

Wine is a social thing, and so are national holidays. There’s nothing more patriotic than gathering together with friends and family in a park or a big backyard and chowing down on hot dogs, hamburgers, chicken wings, or a big ol’ juicy steak. And you know what makes a barbecue even better? Reserve Lot 28 Napa chardonnay or Canyon Road cabernet sauvignon. Don’t forget to bake an apple pie for dessert.

4. Take a road trip (and visit some wineries)!

Fireworks. Barbecues. Apple pie. Will Smith. You know what else is quintessentially American? Road trips. Pack a basket with snacks, grab a few bottles of Aldi Valdobbiadene Prosecco, and hit the highway! Visit Michael Shaps Wineworks in Charlottesville, Virginia, or Inwood Estates Vineyards in Fredericksburg, Texas, or stop by the Hanzell Vineyards in Sonoma, California—all of which made The Daily’s Meal’s “101 Best Wineries in America” list in 2017. Once you’ve gotten your fill of wineries and vineyards, don’t forget to stop by a famous wine bar, such as:

Ever heard of Gik? A recent Spanish invention, Gik is a sweet wine that’s been dyed electric blue with indigo and anthocyanin—the latter of which is a pigment naturally found in grape skins. Gik only just hit American shelves in September 2017, and at $11 a bottle, it’s both affordable and trendy. For those with an aversion to dyed or artificially sweetened wines, however, we’d suggest sipping a Cameron Hughes Lot 527 Anderson Valley pinot noir (red), a Nobilo Icon sauvignon blanc (white), and a Blanc de Bleu Cuvee Mousseux champagne (blue enough for government work) this Independence Day.

Need a place to store and display your favorite wines? Ultra Wine Racks has different wine racking designs that are fit for any living space.

Get 20% OFF all Chrome racking systems today!